A Glance of Oxford – an excerpt from The Team Formula 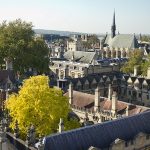 “You cannot open a book without learning something.”

The city of Oxford is dominated by its famous university. It was founded in 1096 and is the second oldest university in the world.

Scores of the city’s buildings, including some of the famous colleges, are built from the distinctive Oxfordshire limestone, a creamy pale yellow colour. For decades this place of learning has attracted scholars, artists, writers and visitors. In contrast to the calm majesty of the buildings, the streets are filled with a variety of colourful bikes. They seem to buzz with activity as students and academics dash from place to place. It was, without a doubt, a truly unique place for the team session.

JR was the first to arrive. He was pleased to arrive early as it gave him the chance to take a walk around Oxford. As he walked down the High Street he felt very reflective.

“It’s old, yet very young, this city of eternal youth and learning”. There was something in the air that JR couldn’t quite put his finger on. The old buildings, the winding streets all screamed of history, yet the young people in the street gave the place a sense of energy, hope, aspiration for a bright future. He had never been to Oxford before and was wildly excited about all that history. At the same time, he had to admit that he was a little apprehensive about the two days ahead. He didn’t know what had happened after he had told Stephen about Samuel. “How are these next two days going to work, I wonder? I hope it’ll be a good use of all our time” he thought as he watched a young woman reading a book on the riverbank. At that exact moment she looked up, saw him looking at her, and smiled gently. JR grinned back, and felt inspired by that youthful radiance. He continued his solitary walk with renewed energy, map in hand.

“It will be good to see the others again, especially Sophia”. He was looking forward to the coming days.

Sophia pulled up outside the River Castle. She loved driving and had offered to give Stephen, Christine and Samuel a ride from the office. Samuel had said he would make his own way and would arrive late that evening. The other two were happy to accept and they had had a good opportunity for a catch-up on the way there.

The River Castle Hotel, despite its size, was hidden away behind the glass houses by the river. It was surprisingly quiet considering it was right in the city centre.

Stephen and Christine both nodded enthusiastically. Christine actually looked more enthusiastic than Stephen had seen her in a long time. That bode well.

The limestone building had two turrets protruding proudly through the solid structure. The front lawn was shaded by a dramatic cedar tree lodged solidly next to the gatehouse at the entrance of the property.

It had been sunny and warm for days if not weeks now, but as they had entered Oxford, it started to cloud over. The heat was stifling, “very unusual for late September”, reflected Christine as she reached for her bag in the back of the car.

“See you all for drinks in half an hour” said Stephen. He bounded towards the big oak door, which was ajar.

As Stephen and Sophia entered the hotel, Christine gazed across the meadow leading down to the river. At the riverbank, she spotted two squabbling ducks. “I wonder if that will be us. And I wonder how Laura will use the answers from her interviews. What did I say? I can’t remember… I know I was very honest, I hope it won’t come back to haunt me”.

Like many of her fellow Swedes, Anna had spent a lot of time in England, and this particular city was one of her favourites. She enjoyed the taxi ride as it offered her a chance to just sit back and do nothing. She admired the tree lined avenues leading into the city, with row upon row of imposing late Victorian houses. “This is England at its best”, she thought. A big smile suddenly spread across her face as she spotted the “dreaming spires” of Oxford. She was looking forward to spending time with the team, even more so in this inspiring and educational setting. She trusted Stephen and was convinced that the next two days would be good for the team. As her taxi came to a final halt, she alighted with confidence.

Samuel was an academic at heart. He had studied History of Art at Cambridge. As much as he admired Oxford for its academic standing, it wasn’t Cambridge. In his eyes, it would always come second. Samuel hoped that the session would be an academic exercise about teamwork, where they could all understand the concepts and work with them. He didn’t like to have to interact too much with the team. Moreover, he doubted the value of having some external consultant run the session; “Surely Stephen could do this himself, if he was a real leader?”

THIS EXCERPT sets the scene of when the team members arrive in Oxford to spend time together to build the team in earnest.

Take a look at the video below “Watch our video on Disruptive Live TV where we talk about our latest book “The leaders Guide to Impact” here we explain in more detail the 3 parts to the book. Everyone has an impact, leadership is the act and art of influencing others so if you have to influence others then you are a leader. There is something for everyone”

We use cookies to ensure that we give you the best experience on our website. If you continue to use this site we will assume that you are happy with it.OkRead more